Couscous was introduced to Sicilian cuisine during Arab rule (827-1091 A.D.). Popular mostly in the Trapani area, on the island of Favignana and in Mazara del Vallo, it soon became a dish served on a daily basis. Here, couscous is cooked in a special pot, known as the "mafaradda", and accompanied by a tasty fish broth. In September, the Cous Cous Fest is held in the province of Trapani, in San Vito Lo Capo, in honour of this dish so rich with history and flavours.
6
Difficulty
high 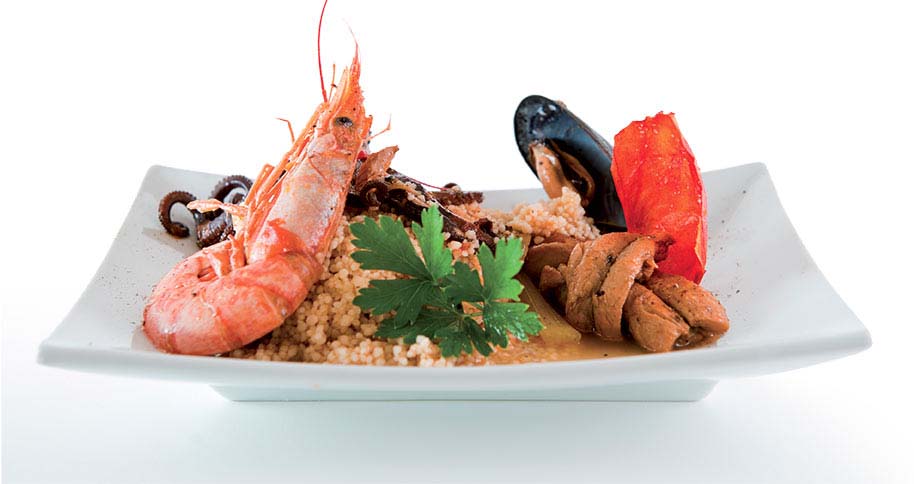 For the couscous:: For the fish stew::

In 100 cl of hot water dissolve a pinch of saffron powder. Mix together the two types of semolina flour. Pour a spoonful of the saffron water into the "mafaradda" along with a fistful of semolina: using the tips of the fingers on the right hand rub the semolina against the bottom and sides of the dish until small grains are formed in a size that varies from a half millimetre to a grain of pepper. Set the grains out to dry on a tablecloth. Prepare the fish soup: in a round and very wide saucepan pour in a half cup of oil, chopped garlic and parsley, the onion thinly sliced and a bay leaf and brown. Add the peeled and chopped tomato. Sauté for a moment, then add all of the carefully deboned and washed fish into the pot in a single layer. Cover the fish with two litres of water and salt and pepper to taste. When the fish is cooked, filter almost all of the broth putting half a litre off to the side; measure the remaining broth and pour into a pot (large enough to contain the perforated container). At this point you should have two litres of liquid. If necessary, dilute the broth with a bit of water. Rest the perforated container or colander on top of the pot. Place the couscous into the perforated container and toss it with 60 g of olive oil, mixing with a wooden spoon. Close the container tightly with a cover, placing a thick cloth on top. Put the prepared pan over the flame. The couscous cooks with the steam from the broth, which will unleash the aromas of fish. Simmer over a low flame. After approximately one hour and a half the semolina will be cooked. Pour it into a small saucepan, sprinkle with some of the reserved hot broth and allow to rest for an hour, occasionally moistening it with additional hot broth, stirring with a wooden spoon each time. By absorbing the broth, the semolina will swell. When the couscous is ready, pour it into a serving dish, warm the fish and dampen the semolina grains once again with a bit of the dense broth contained in the pot where the fish was cooked. Season with a grinding of fresh pepper, a pinch of cinnamon and salt, ground cloves and nutmeg. Mix together and place a few pieces of deboned fish meat on top. Serve the sauce and the broth on the side, allowing diners to add the amount that suits their taste.

A cosy restaurant, situated in a relaxing garden
with stunning views of Mount Etna